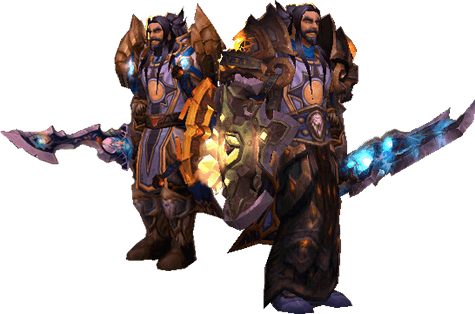 Today I’d like to talk a little about the perceptions that tanks have towards their healers, and vice-versa. I began my paladin as Holy, and it has been Holy the whole way (not including my little foray into Ret, that wasn’t permenant). I have spent my WoW career healing (no matter how ineffectively in the beginning), and have began to learn the intricacies of the Tank/Healer relationship. As of recently, I have been both Holy / Protection dual spec; and thanks to the LFD tool, apparently I am needed as Protection more. With this in mind, it has taught me how a tank can make a healer’s life easier.

When I first began raiding any bit regularly, I felt that it was more the boss fight that determined how hard a tank was to heal; however, I have since learned that in all reality, nearly all fights can be made “easier” if the tank and healer work together. I have healed every tank that there is, and have learned which tanks seem to be more spiky/squishy than others. From this knowledge I have also learned how to tank effectively, while still making life a bit easier for the healer.

1.) Not all bosses are stationary:
I have learned this the hard way. When in a raid, and even in some heroics, the tank cannot always stand in one place, and let the rest of the raid do the moving. Bosses, and even some trash, can have AoE that only affect those within melee range. If not AoEs, then something that you should NOT stand in. Now, this doesn’t only mean you the tank, but also the other melee who should either be behind or beside the boss (think dragons and their lovely hit box safe areas). The more you as a tank move out of the fire/ice/slime/puke the less chance the healers have to hit “oh shnizzle” buttons and save melee. In addition to assisting the healers, this also helps those melee dps, as they won’t have to reposition as much and can continue stabbing the bad guys quicker.

2.) Manage the cooldowns:
This is a given, every tank knows that there are going to be “oh shnizzle” moments. And we have tools that help with those moments. However, they also depend on different cooldowns. I have come to learn that some oh shnizzle buttons can be used more often then that one moment. An example being Divine Protection. (Now this blog is a bit biased towards Paladin tanks and Paladin healers, so you’ll have to bear with me.) As a tank, I can use Divine Protection to provide myself with a shield that reduces damage taken by 50% for 12 sec. This does activate Forbearance which will knock you out of using it again for 3 minutes; however, if used early enough it can be usable again (These cases are usually only Raid bosses, Heroic bosses fall within a minute now-a-days). What I’m getting at here, is that taking advantage of cooldowns early enough can allow the healers to reserve mana for the more expensive moments later on in a fight. But don’t forget your trinkets (I have, and it’s not funny… ok it is, in a sad kind of way).

This also goes for healers; as cooldowns or trinkets used early on can definately help in the long run, but should be managed with those of the tank; as a cooldown wasted is not a good cooldown. An example of this would be Divine Illumination. At first I was paranoid of not having enough mana by the end of a fight, and would always start a fight with Divine Illumination running. Now, if the fight was long enough, sure I could use it again later; however, if the tank used any cooldowns early on, then that 50% reduction in mana cost was really wasted, as I’m not going to be healing as much.

Coordination and Communication are key. This leads to my next point.

3.) Coordination and Communication:
Now-a-days, just about everybody is able to use Vent or some variant. I personally am able to listen to vent but not speak, since my gaming PC is right next to my son’s room, so to be polite, I try not to make too much noise. I do regulate the volume and listen to the other people in Vent, though. The very act of listening to the other raiders in vent can increase survivability of the raid. Especially if the Raid Lead is calling out events that are happening; especially those that you may not be able to see directly on your GUI. This point also pertains to coordination between tank and healer cooldown coordination. If a Paladin healer calls out that they have just used Lay on Hands on the tank, then the tank should know that the heal bomb that they just got isn’t going to come again for at least another 3 minutes. In the beginning this was a point of contention, as Paladin tanks who were healed with Lay on Hands from a Paladin Healer used to get Forbearance (I can’t remember if this was only on the PTR or not), because of this, the Paladin tank could not use any of his oh shnizzle buttons until that Forbearance wore off. This external cooldown heavily limited the survivability of the Paladin tank. So, to prevent this, the tank and healer would need to communicate as things happened, or even strategize prior to beginning the fight.

4.) Pay attention:
I really felt this is important, not only in how I tank things, but also from a story I read from the Big Bear Butt Blogger. It was a story about an oblivious DK tank who didn’t look beyond his tunnel vision to see what anybody else was doing behind them… whether it be dieing or finishing off the mobs that the DK had not gotten aggro on. I have healed several tanks who are like this. No care or attention for the healer or even the DPS, but instead steamroll ahead and finish everything off as fast as possible. Thank God for Divine Plea, Divine Illumination, and if I’m lucky, Replenishment. But I have never been that kind of tank.

When I tank, in heroic instances specifically, I often start off the run by saying “Please let me know if I need to slow down, I’ll be watching mana levels, but just in case holler if I’m going to fast.” Polite and to the point. I’m basically saying, I’m going to try and fly through this for you guys, but don’t want to stretch you thin. I’m open to responses, and even the scathing “SLOW DOWN!”. I don’t however, try to make an instance easysauce, and slow down to a crawl. In a way, I guess I try to teach other healers a bit of skill, in that I will push them a bit but not so hard that they /ragequit. I’m no hardcore healer or tank, but I do feel that I can help others if not in a roundabout way.

This last point seems to circle back to the first, in that paying attention will lessen your chance of standing in the bad stuff. You’ll still need to move out of the bad stuff, and move far enough to keep your melee dps group effective.

This concludes my first “guide” to synergizing Tanks and Healers. I hope to do more of these in the future; let me know what you think. Also please let me know of any other topics that you’d like for me to do a post on, I’m very open to suggestions.

One thought on “Tanking from a Healer’s Perspective”