I hope  you all had a good weekend.  I know that I did.  As of Friday morning our houseguests had left, and we are free!  Therefore I was able to turn on the computer! YAY.  So I’ve got a bit of news from the WoW front, and how a casual raider can get things done.  I’ll start below, with some background info.

Basically, I’m able to get online and visit Azeroth maybe 2 or 3 times a week.  The timeframe in which I do is usually after 9:00pm CST, for maybe 2 hours, depending on how long I can keep my eyes open, and whether my wife wonders if I’m ever coming to bed 🙂

As I stated earlier, I’m not on that often. However, when I am I try to get as much done as possible. I often, first head to Dalaran, pick up the weekly raid, and then sort through my bank for a bit.  This allows me to watch Trade chat for any possible PuGs that need a healer or a tank. Ever since I’ve began doing a few Guild runs as Protection in ICC, I’ve gained a lot of confidence in my tanking skills, so I am now able to offer both in a raid environment.

Anyway, if nothing catches my eye, I’ll do a quick daily random dungeon.  I have truly become one with the title of “the Patient”, as I really don’t mind PuG’n with anybody, no matter the gear level, cause everybody has to start somewhere. Usually, as most runs do now-a-days, the daily is quick, and I’m back in Dalaran.  So, it’s time to hit the cooking daily, and listen for some more raid PuGs.  Usually, since I’ve already done my daily random, I’ll throw myself into the Raid browser, picking out specifically the weekly raid, and also VoA for kicks. And again, I wait, but at least I know that I’m visible, in case anybody needs anything.

Most often then not, I’m able to get online on Sunday nights.  This, from what I’ve found, is probably the 2nd to 3rd best day to be looking for PuG raids.  The others would be Tuesday (obviously), and Monday evenings.  Here’s the reasons why:

So, we’ve gotten that straightened out, now what happens if you get an invite to a raid, that is obviously partially into the instance, and it’s a Tuesday night?  Well, I personally would hold off on any PuG raids that early in the week.  Simply because that keeps  your doors open for any guild runs that may need a warm body. The guild I’m in has two levels of raider, “Raider” and “Member”. I knew that I would not be on as often, but was still willing to help if needed, so I settled for “Member”.  This is important to do, so that you don’t feel guilty in case you can’t make a raid, but it is more important to keep  your options open in case they do need your help.

No matter how good the PuG may be, it’s best to stay available.

Another scenario is it’s Sunday night, there’s a group needing some healer help on Blood Princes. That’s obviously deep into the instance, and you would miss out on a good bit of loot chances; however, you only have 2 nights available to run, and you can’t guarantee that you’ll be able to get on again.

This actually happened to me last night.  I entered the instance and got the little popup letting me know that I was in a run already in progress “7/12 bosses down”.  Well, needless to say, it didn’t go any further.  We got set up, and were ready to take a shot at it.  There was a bit of chatter about this being the last attempt, and that it would pick up mid day the next day… ugh, dumb ‘ol work schedule.  Well, I was locked into ICC 10, sitting in fron tof the Twilight Gang, ready for my very first ever try at this fight.  We pull, I start healing my assigned tank, Beaconing the ranged tank.  Suddenly an Empowered Shock Vortex pops up, and there are way to many folks close to it, and pop, there goes the raid.

One try, the raid leader says, well it’s getting late, I think we’re going to call it. *Sigh*

The raid lead did apologize for bringing me in so late, and locking my raid timer for the week. Even if he hadn’t I still had the same attitude.  My reply was “No biggie, I’m hardly on, so just seeing the fight was fun, thanks again”.

I have seen several articles before where the attitude would have been different. However, I know where I stand, and what limitations I have.  I can’t blame others for the fact that I’m unable to get on as much, and as such, should be greatful to those who are willing to pull me into their raids. People percieve you by your attitude. If this is such a case, then I may be invited again sometime in the future, as the raid lead knows that I may not be available, but am greatful no matter the situation.

Because of the time at which I’m able to get on, usually everybody is asleep, including my son across the hall. So I have to be extra quiet. Since I don’t have any good headphones, I have found some new stuff that might help you out. It sticks with the “etiquette” theme, as I’m trying not to bother someone else, my son in this case. Anyway, without further-a-do… 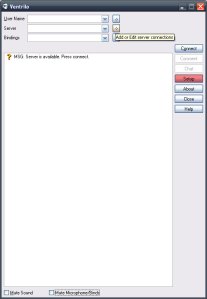 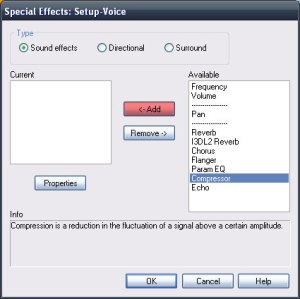 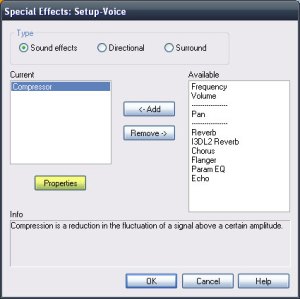 The steps above should allow you to keep all voices on Vent at a normalized volume (no loud while some quiet). Because of this setup, I’ve been able to get on Vent, and control the volume of EVERYONE with no trouble, allowing me to keep it low enough to hear but not wake anybody up.