Sorry for the delay, but here we pick up with Khraden’s revalation.

END_OF_DOCUMENT_TOKEN_TO_BE_REPLACED

Picking up where we last left off, Khraden completes his conversation with Afrasastrasz at Wyrmrest Temple.

END_OF_DOCUMENT_TOKEN_TO_BE_REPLACED

I’ve got a little series coming up that I’d like to share. It isn’t a blog on a specific subject, but one of my own writings that I thought I’d toss out there. Maybe let you all get a feel for it, and even toss around some editorial comments.

The story is called “Silent Ice, Raging Fire.” It is a compilation of the life of my World of Warcraft Paladin, between the expansions of Wrath of the Lich King and the Cataclysm. It has a couple of twists and turns, and even a little love story attached.

It is a pretty rough draft. I’ve only gone over it a couple times, and made changes here and there, but haven’t really proofread it fully yet. I’m pretty sure that the chronology should be in place, but any comments are welcome.

We’ll start it, after the break…

END_OF_DOCUMENT_TOKEN_TO_BE_REPLACED

Long time no see.  I’ve had the beta for a while now, gotten to experience some of the new goodies coming to us in September (25th) but not as much as I could have.  Been busy around the Lionbearer household.

First up, a little side project.  I signed up to participate in the [Trans]mogolympics.  It was randomly decided that I would represent the Mag’har. It made for a fun little project to work on.  I’ve been told that I can display my flagbearer, but nothing more… so here he is. 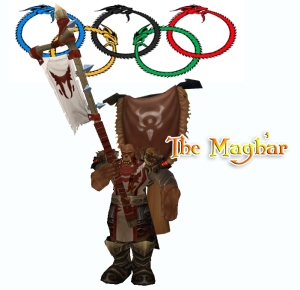 On that note, I’ve completed all of the transmog outfits, and will be posting them here once the competition is underway. Check out the [Trans]mogolympics site over at Arcane Wordsmith for more information.

On a completely different subject, my wife and I have been busy at work on opening a bake shop, aptly named “Happy Cake.” She’s acquired a building and has been working day and night on getting it ready for a grand opening.  I truly wish that there was more that I could do to help out, but my day job has otherwise taken up my time. She’s really excited, and I am ecstatic and so proud of her working on making a dream come true.  It’s cost a pretty penny, but we’re sure it’ll be successful.  Fortunately we didn’t have to pay to have a website built… cause I do that for a living, haha (that’ll be coming soon as well).  To top it off, my oldest will be turning 5 next month, so we’ll have a really busy year coming up.

I’m not sure if you all remember me mentioning that I was working on a sidestory/RP/fanfic pertaining to my own characters (in fact several).  Well, I finished one of them, it’s a little over 25 pages long. It’s a very rough draft, and I’m sure has all kinds of errors all over it, but I want to share it with you all.

I’m going to start a series of posts that include about 5 pages a piece. It’ll be posted here on this blog, as well as my other Horizon’s Blade writing blog.

I hope to see you all on September 25th, God willing, I’ll be joining you on the journey into the Mists of Pandaria.

I really liked this week’s shared topic.  I’ve kind of slacked a bit lately, on posting in general, AND in keeping up with shared topics from “Blog Azeroth“.  But thought I’d hit this one up for fun.

In a single word: “sorta”. Really depends on which alts.  I have actually written a 17 chapter fanfic about how my Paladin Khraden got to his current position (well at the time, just entering Wrath).  This didn’t really include a lot of my other alts; however did include some of my brother’s characters, who just happen to be related to my alts.

So, here’s the tree:

So, in short, yes, they for the most part have met each other (at least the Alliance Side) at one time or another; be it by blood relation, marriage, or fellow soldiers and family friends.

This was really a fun subject to tackle.  Sorry for such a short post, but I guess the chart itself does most of the talking. It kind of made me realize how much RP I really do, though not in game. It’s something that I guess can be considered a guilty pleasure.

Lightning strikes outside the boarded window, as rain pours down the side of the small office.

The door slowly creaks open, revealing what little light was outside, long missing from these inner corridors. Within that light a shadowy figure appears, moving through the doorway. A cloaked individual, carrying stacks of paper, and photographs.  The figure dusts off the layer of dust atop the nearby desk and places the documents down.

He is soon followed by a much larger figure, slightly hunched, and very muscular, clad in what appears to be plated armor. A sent of wet dog fills the air.

A gust of wind blows in the door, causing some of the documents to be lifted off the desk.

“Please, close the door behind you Mr. Ashenmane,” the first figure says.

The other figure pulls the door tight, preventing any further gusts to enter. He then turns and lights a nearby lantern filling the paneled room with a flickering glow.

“Well then. I feel that we should get to work then,” the cloaked figure determines. “Mr. Ashenmane, please introduce yourself to our audience, while I sort through this mess. It is likely a smaller group than before.”

The larger figure stretches to his full height, adjusting his chestpiece to fit mor comfortably. The lantern now revealing the ashy white fur that covered his body, and the deep set yellow eyes peering out above a long pointed snout. His ears both pointed, one slightly lower than the other due to the cut across it’s lower lobe. His grin revealed several pointed teeth, some protruding even beyond his lips. His hands tapering into pointed claws, yet articulate in their movements.

“Good morning, ladies and gentlemen.  I, am Mr. Logosh Ashenmane, former Sergeant-in-Arms for Lord Greymane’s army in Gilneas. As you can likely see, I have been changed by the worgen curse that is so prevalent in Gilneas, but do not fear, I have control over my affliction.

“I have been asked to join your host Crusader Khraden Lionbearer in providing some new insight into this new world that we now live in,” the worgen stated.

Khraden removes his hood, and replies, “We greatly apologize for the recent lack of information, but we are told this ‘real life’… thing… has been getting in the way of our duties here. We cannot make any definite promises, but I hope that Mr. Ashenmane and I can provide more future coorespondence, beyond just random babble.”

— Thanks for those of you who have hung around.  I have been pretty busy, and have not had the time, nor the ability to post much lately.  But I’m hoping that will change.

Hello everyone, I hope that you all enjoy the upcoming Labor Day (if you’re here in the US and get the nice long weekend).

Today’s post is going to be a bit off topic.  I’ve been reading a lot of the recent feminism/racism/gnomism posts that have been floating around the blogosphere and one really caught my eye with its Azerothian subject matter.

That would be Krizzlybear’s latest post on how Gnomes are treated in Warcraft Lore and how they are represented in Role Play. Now, to make a quick note, I don’t actually RP while online, one because I’m not on enough to really build a story or relationship with other players, and two, I’m kind of content on my current server (lots of local friends here) and am really slow to level so couldn’t really have a lot of “tools” to use for a while.

My bitch, you will be.

END_OF_DOCUMENT_TOKEN_TO_BE_REPLACED

Copyright © 2008-2010 GigaWatts IT Solutions
Illumination
Create a free website or blog at WordPress.com.